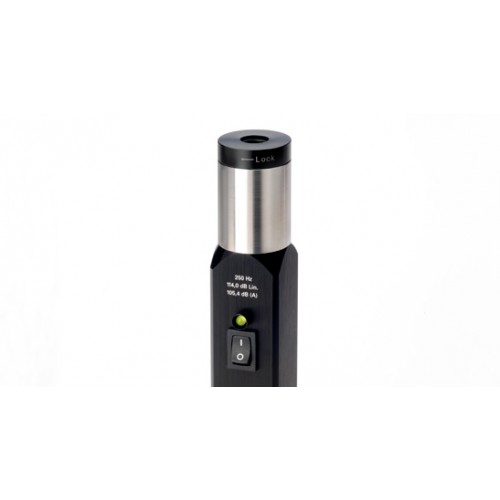 Typical applications and use

With a microphone placed in the coupler of the pistonphone, the calibration level is:

At a static ambient pressure of 101.3 kPa, no further correction factors need be applied.

The 42AA is an extremely stable laboratory standard sound source which can also be used for field calibrations – it retains its high accuracy even under hostile environmental conditions.

The pistonphone works on the principle of two reciprocating pistons actuated by a precision-machined cam with a sinusoidal profile. The rotation speed of the cam is controlled to within 0.5% via a tachometer signal in a feed-back loop. The 42AA has a dual-colour LED above the ON/OFF switch to indicate both battery condition and stable operation.

Each pistonphone is factory calibrated with an accuracy of ±0.09 dB re. 20 μPa and is supplied with an individual calibration certificate stating the exact value and test condition. The exact value is adjusted to be 114 dB within ±0.05 dB under reference conditions. Since the output level of a pistonphone depends on the static ambient pressure, the 42AA is delivered with a barometer which shows directly on a printed scale what must be added or subtracted to the output level of the pistonphone.

Get in touch to book the 42AA Pistonphone.