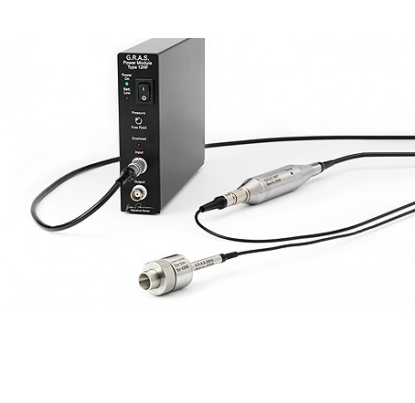 The G.R.A.S. 43BB is a low-noise, high-sensitive ear simulator system for measurements of sound pressure levels close to or below the threshold of human hearing.

Typical applications and use

43BB has been developed to meet the consumer electronics industry’s need for R&D testing of headphones, especially in-ear headphones with Active Noise Cancellation. Because it can measure down to and below the threshold of human hearing, it can measure the influence of the electronics on the audio response of the earphones.

The low inherent noise of the system also means that correlation to subjective listening results is very good, and that THD and Rub & buzz at very low levels can be investigated.

Basically the 43BB consists of the RA0234 Low-noise Ear Simulator and the 40HT low-noise microphone system. The RA0234 is identical to the well-known standardized IEC 60318-4 (711) Ear Simulator, but the built-in microphone is the 40AH microphone which has a specially reduced inherent noise floor in order to achieve a large dynamic range. Its diaphragm is specially tuned to yield high sensitivity coupled with low internal-noise generation.

The 40HT Low-noise Microphone System comprises the 40AH ½” Ext. Polarized Pressure Microphone, which has a specially reduced inherent noise floor, and the 26HG ¼” Preamplifier. The 26HG is similar to the G.R.A.S. 26AC ¼” Standard Preamplifier with 3 m integrated cable, but with a 40 GΩ input impedance to enable low-level noise measurements. It has an integrated lightweight cable terminated in a 7-pin LEMO connector that plugs into the 26HT Gain and Filter Unit.

The preamplifier is connected to the ear simulator via the GR0010 Adapter. They are glued in place to ensure that dust and dirt do not jeopardize the low-noise capability of the ear simulator. To complete the system, a special power module is part of the delivery, i.e. the 12HF 1-Channel Power Module for Low-noise Systems.

The acoustic input impedance of the RA0234 is identical to that of the G.R.A.S. RA0045 Ear Simulator according to IEC 60318-4 and, as a result, loads a sound source in very much the same way as a human ear. The RA0234 embodies a number of carefully designed volumes connected via well-defined and precisely tuned resistive grooves. In an equivalent electrical circuit, capacitors would represent the volumes, and inductance and resistance would represent respectively air mass and air flow within the resistive groves.

Get in touch to book the 43BB System.