Scan & Listen (Including Box)
from Microflown 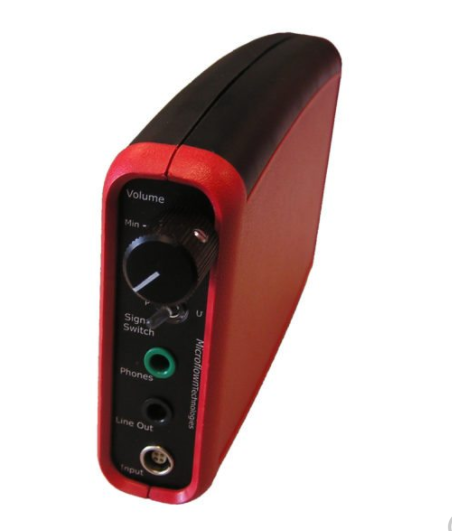 Human ears are similar to microphones in many ways and are sensitive to sound pressure variations. Microflown’s Scan & Listen brings the sound of particle velocity is now also made audible!

Traditional microphones are sensitive to the scalar value of sound (magnitude but no direction) whereas the Microflown is sensitive to the vector value (magnitude and direction) which is directional acoustic particle velocity. The combination of a Microflown with a Scan & Listen device can make our ears capable of hearing particle velocity so you can listen to what nobody has heard before. A good example of this is to listen to a noise source where there is excessive background noise and noise reflections. Locating sound sources in  practical environments can be very difficult especially in conditions with non-stationary sources like measuring squeak & rattle in a moving vehicle. Just listening to particle velocity can give you better results than extensive and detailed FFT analysis!

The Scan & Listen method uses quick scans instead of a time consuming series of measurements and it is an intuitive method of sound source localization. Also acoustic leakages can be detected quickly and accurately with this system. The system also has the option to record the signals simultaneously while listening. The Scan & Listen setup contains a background noise reducing headphone (passive -40dB ) which means the signal of the particle velocity is even clearer in your ears.

Get in touch to book the Scan & Listen (Including Box).